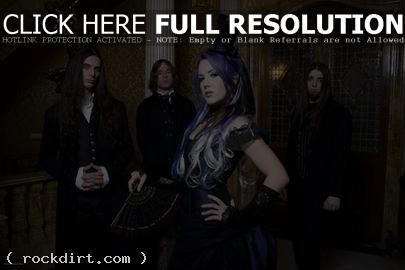 The Agonist’s Alissa White-Gluz has been named the world’s “Sexist Female Vegetarian” by Peta2. The star-studded competition for the 2011 title included celebrities such as Natalie Portman, Anne Hathaway, and Olivia Wilde, but the Canadian metal band’s frontwoman took home the prize. While honored by the title, Alissa is just happy to show a different side of herself and other fellow veggies.

“I have been vegetarian since birth and vegan for more than half my life,” she remarked. “Living cruelty-free is the closest thing to a religion I’ll ever believe in and it is a huge part of me and my music. Of course, the ‘sexiest veg celebrity’ contest is just for fun, but I do like how it shines a different light on the idea of veganism/vegetarianism. It’s showing people that a lot of the celebrities that they look up to and admire already follow this lifestyle, and that it’s not some weird, challenging, alienating ordeal to be veg – it’s simple, healthy, popular, and, well, sexy! I’m very honored to have won.”

The Agonist recently completed a South American tour and are currently in the studio working on their upcoming release, a follow-up to their 2009 effort ‘Lullabies for the Dormant Mind’. All instruments have been tracked and Alissa is in the midst of finishing up her vocals on the album, due in early 2012.

For North American fans that can’t wait until 2012, The Agonist will be touring this August/September with Alestorm and Kamelot.