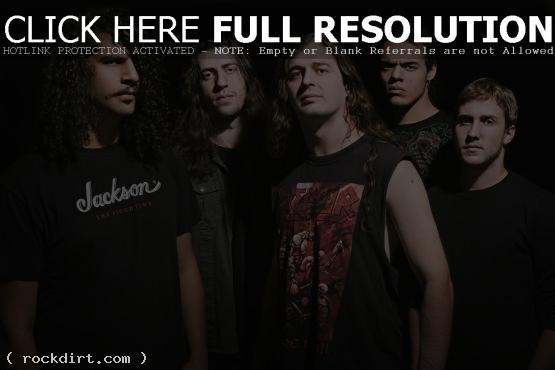 As Warbringer begins their North American tour supporting Iced Earth and Symphony X week, it has been revealed that longtime guitarist Adam Carroll has decided to leave the band and last weekend’s shows supporting Death Angel were his last. Adam stated:

To all fans and friends, I, Adam Carroll, have officially quit Warbringer. I have financial issues at home that have to be addressed sooner than later. I hope you all can understand and respect my decision. It’s been some of the best years of my life and I appreciate all the support you the fans have given us and continue to give. I will forever be part of the Warbringer family. Many thanks and until I see the rest of you again, keep the metal alive. Cheers!

The band enlisted Andrew Bennett for the purpose of filling in live for this tour with the hope that he may become a permanent member of the group as he continues his audition process where it matters most – on the stage and in the van. Bennett said:

Last month I received a message from the guys, which basically stated that Adam was requesting to step out. As a result, they were searching for a possible replacement who could learn the material in time for the upcoming Iced Earth and Symphony X tour. I jumped at the opportunity and started learning some tracks. Around the beginning of this month I went down and jammed with the guys and the rest is history. I am eternally grateful to my friends in Warbringer for giving me the opportunity to play with them and I am very excited about what the future may hold. But, one thing that I would like to make clear is that I don’t view myself as Adam’s replacement, as much as I view myself as filling the position instead of him. Adam’s work with the band and time with them is not something that can be erased and I would just like to make it clear that I respect him greatly. He has left big shoes to fill and I have a lot of work ahead of me if I am going to honor his legacy with the band. I’m looking forward to interacting with, and playing for the fans on the road! It’s time to shred!