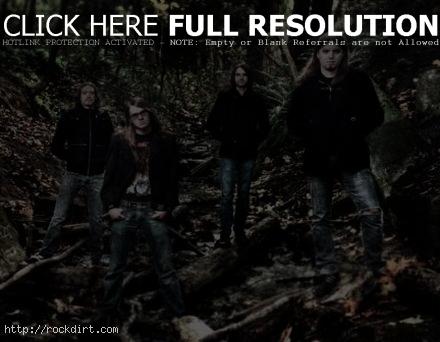 Progressive atmospheric death metallers 7 Horns 7 Eyes will be releasing their debut full-length album, ‘Throes Of Absolution’, in North America on April 24th via Century Media Records. The album features a guest appearance by Jeff Loomis and has been many months in the making.

In regards to the state of the band and their upcoming release, guitarist Aaron Smith commented: “7H7E has been on quite a journey since we embarked on recording this album, full of some big ups and downs – not the least of which being signed to Century Media/Basick Records, enduring a front-man change, re-recording all the album vocals, and sharing the stage with some great bands… and let me tell you-it feels amazing for us to know that we finally get to release this thing out into the world. Many of our fans have waited patiently for years for this record to drop, likely wondering at times if it ever even will, and we can’t thank them enough for sticking by us. Here’s to our fans and to 2012 being a great new year for 7 Hors 7 Eyes! See you on the road!”

The complete track listing for ‘Throes Of Absolution’ is as follows:

1. Divine Amnesty
2. Phumis: The Falsehood of Affliction
3. The Hill Difficulty
4. Cycle of Self
5. Delusions
6. A Finite Grasp of Infinite Disillusion
7. Vindicator
8. The Winnowing
9. Regeneration