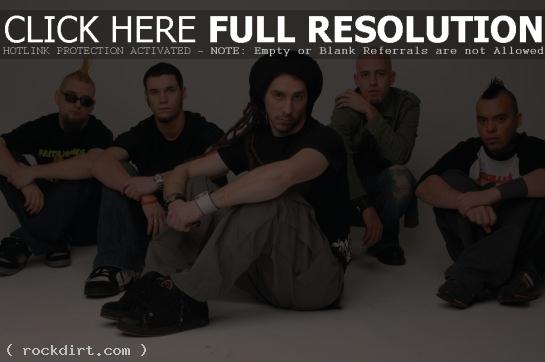 10 Years drummer Brian Vodinh checked in with fans on the band’s blog at MySpace on Tuesday (August 14). He writes:

I can’t believe I’m about to say this… but… the record is almost completely finished! Yeeeeeeeee-haaaaawwwwwww! We are in the last few days of the mixing stage and it kind of feels surreal. We are all very, very pleased with how everything has turned out. Of coarse it was a long, tough road to create this album, but all the yelling and arguing has been well worth it!

We had a really interesting time recording in Seattle. The vibe was kind of dark and melancholy and I personally felt kind of weird the whole time we were there. That wasn’t a bad thing though, I’m at my best creatively when I’m in a completely fu**ed up mood. Strange huh?

Now that we are mixing the album the songs are really coming to life. This album has so many more little subtle nuances and textures than the Autumn Effect. Also, this collection of songs is way more diverse. At this point we are just putting the finishing touches on the songs before we send them out to be mastered.

On a different note, since we have been putting in some serious hours in the studio lately, we finally decided to take a day off and me and our buddy Ryan Williams (the SSL mastermind who is mixing our record) decided to take a day trip to Catalina Island. Holy crap, I strongly recommend you check this place out if you are in the LA area. It’s like an hour boat ride from LA and when you get there you feel like you are in a different country or something. We decided to get up at 5 AM and get there super early and start a day of hiking. The trail we chose was pretty brutal for the first hour or so, but the views made it well worth it. We hiked about 15 miles, at one point even reaching such a high elevation that we were literally walking through clouds! It was amazing.

Anyway, we are in the process of getting our touring schedule straightened out and we should have news and dates for that very soon. Looks like we will be hitting the road in October. We hope you guys are ready!